Universities Ireland, the network of university presidents and vice-chancellors on the island of Ireland, sponsored the seventh in a series of conferences to commemorate the centenary of key events in the history of modern Ireland ranging from the Ulster Covenant, through the First World War and the 1916 Rising, to the foundation of the Irish and Northern Irish States in Ulster University, York Street on Saturday 1st December 2018 under the title Reflecting on a decade of War and Revolution in Ireland 1912-1923: Votes for the people: 1918, Ireland’s first democratic election?

The post-war general election of December 1918 is one of the most important events in Ireland’ modern history. Constitutional nationalism was swept away by the reborn republicanism of Sinn Féin in three of Ireland’s four provinces. It was not, however, an unvarnished triumph for the more radical Irish nationalism forged by Easter 1916 and the conscription crisis of 1918. The Unionist position in North-East Ulster was further entrenched, and the outlines of a future partitioned island became apparent from the electoral map.

While the revolutionary outcomes of the election have dominated historical analysis, it was also the most democratic election seen in Ireland up to that point. For the first time all men could vote, as could most women over thirty years of age. The electorate swelled from 800,000 to two million voters, providing a unique opportunity for radical political change.

The aim of this conference was to explore both the high politics of the moment and its wider social context. Why did Sinn Féin triumph? How did the enfranchisement of women shape the election and the status of women in society? How did Unionists and Britain respond to the republican challenge? How was the election shaped by local and global concerns during a period of rapid revolutionary change?

To address these questions, we assembled some of Ireland and Britain’s leading historians of the period. 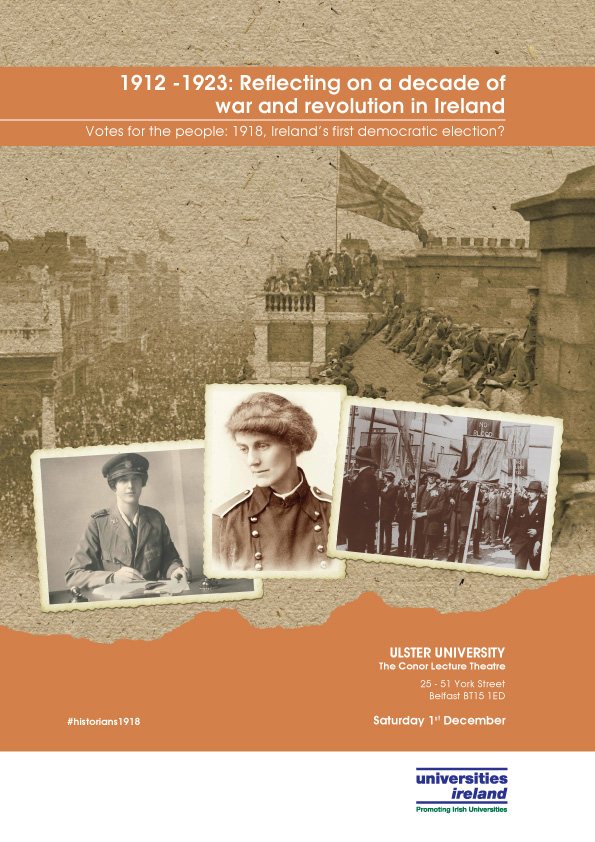