As part of the Northern Ireland Human Rights Festival and to mark the launch of the Scholars at Risk Annual Report Free to Think 2020 we are delighted to welcome Scholar at Risk Serdar M. Değirmencioğlu. 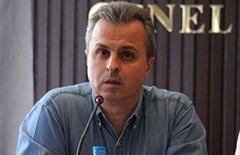 Serdar M. Değirmencioğlu was a professor of psychology in Istanbul, Turkey. He is a public scholar of twenty years’ experience who addresses issues of peace, human rights, children’s rights and social justice. His 20-year career in Turkey was terminated after he signed the Academics for Peace manifesto in 2016. The government accused him, along with 1,128 other signatories, of treason, propagating terrorism, and insulting the Turkish name—offences that could lead to criminal charges or arrest. He was one of hundreds of scholars who were fired from their positions and prosecuted even though the regime knew the decision might be reversed in the courts. Following that he faced prosecution. While acquitted he does not believe it safe to return to Turkey and fears added personal and academic repercussions in relation to the crackdown on the higher education sector following the attempted coup in Turkey in July 2016.  In February 2017, he was listed on a government decree and was banned from public service for life.  In Turkey he and others face the penalty of ‘civil death’.

Forced to go in exile, he has held visiting positions in Cairo, Macerata, Brussels and Frankfurt.  He is now a visiting scholar at FernUniversität in Hagen, Germany

Serdar has served as coordinator of the Children’s Rights Network of Turkey and as president of the NGO/UNICEF Regional Network for Children in CEE/CIS & Baltic States.  He is one of the founding members and past president of the European Community Psychology Association. In 2019, he served as president of the Society for the Study of Peace, Conflict & Violence (Peace Psychology).  In September 2020, he was awarded the Josephine “Scout” Wollman Fuller Award by Psychologists for Social Responsibility for his work on peace and social justice for children. Serdar tweets at @DirenenSerdaR

The event is organised by Ulster’s Transitional Justice Institute and QUB Human Rights Centre. With other universities on the island of Ireland, QUB and Ulster are part of Scholars at Risk Ireland, which receives funding support from Universities Ireland. It takes place as part of the Northern Ireland Human Rights Festival organised by the Human Rights Consortium.

Speakers from TJI and HRC will introduce the report and then Serdar will share his experiences as an academic and why he availed of the help of SAR, followed by Q&A.