The next decade will see a series of centenaries of key events in the history of modern Ireland, ranging from the Ulster Covenant, through the First World War and the 1916 Rising, to the foundation of the Irish and Northern Irish states.

To begin the commemoration of these events, Universities Ireland – the network of university presidents on the island of Ireland managed by the Centre for Cross Border Studies – organised a major one-day conference (co-sponsored by The Irish Times)in the Royal Hospital Kilmainham in Dublin on Saturday 23rd June under the title Reflecting on a decade of War and Revolution in Ireland 1912-1923: Historians and Public History. Over 300 academics, teachers, students, civil servants and interested members of the public attended this event.
The keynote speakers was Professor Jay Winter, Charles J. Stille Professor of History at Yale University, an international authority on the First World War and its impact on the 20th century; Professor  Paul Bew, Professor of Politics at Queen’s University Belfast, a noted authority on Irish and Northern Irish politics and history in the late 19th and 20th centuries; and Professor Diarmaid Ferriter, Professor of Modern History at University College Dublin, one of the country’s outstanding younger historians, noted for his extensive new insights  into 20th century Irish history.
There was also a session on accessing new material from the archives on the 1912-1923 period, with speakers from the Imperial War Museum in London, the National Archives of Ireland and the Public Record Office of Northern Ireland; and a panel discussion on ‘The Challenges of Commemoration in Public History’ with inputs from historians from five Irish and Northern Irish universities (and contributions from the audience). 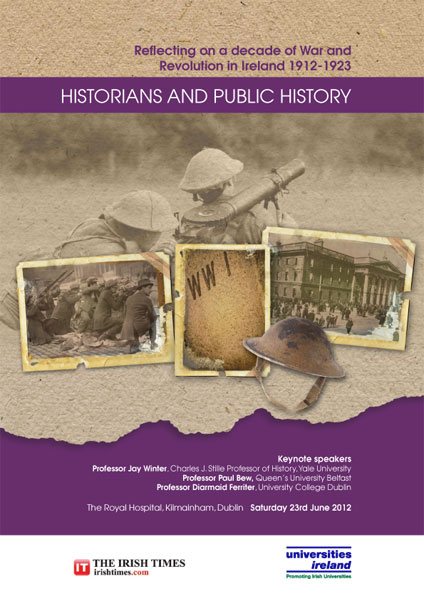