In September 2009, the SAR-Ireland Section was officially launched, with Universities Ireland as the network’s secretariat and partner by Iranian Nobel Peace Prize winner Dr Shirin Ebadi at Trinity College Dublin in September 2009. This partnership between Universities Ireland and the Scholars at Risk network provides support to threatened academics around the world, including by arranging temporary placements in Ireland to allow them to safely continue their work. 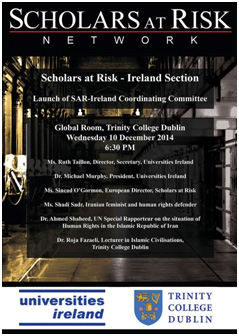 The SAR Ireland Section Coordinating Committee was launched at an event at Trinity College Dublin on 10 December, 2014. This event was addressed by Mr Michael Murphy, President, Universities Ireland; Ms Sinead O’Gorman, European, Director, SAR; Iranian feminist and human rights defender, Ms Shadi Sadr; and Professor Roja Fazaeli, Trinity College Dublin. Over the past number of years, Irish universities in both jurisdictions have provided placements for several scholars who have needed to leave their own countries and some of these scholars have received financial assistance from Universities Ireland. While a number of individuals working and studying at Irish universities have also been engaged in other activities in support of SAR, until now this has not been coordinated across the academic community. The SAR Ireland Section Coordinating Committee will take forward a shared programme of work in each of the ten Universities Ireland member institutions.

To build on the momentum generated following the successful launch of the SAR-Ireland Coordinating Committee in December 2014, a mapping exercise was begun in March 2015 with the intention of determining the range of SAR-related activities currently undertaken by Universities Ireland member institutions. Amongst other things, the exercise will help identify opportunities to further develop the activities that are already taking place, while hopefully encouraging others within each institution to become involved in advancing SAR through the creation of dedicated working groups.

A SAR Speaker Series regional tour is being planned for October 2015. The invited speaker is an established academic in the field of English literature and gender studies, this scholar holds a PhD and MSc in Applied Linguistics from Cardiff University in the UK, where her dissertation focused on women’s literacy in Pakistan. She has more than 25 years of experience lecturing and conducting research at Pakistani, US and European universities and was until recently the Chair of the English Department at a university in Pakistan, where she supervised multiple MPhil and PhD dissertations. A recipient of several international research fellowships and awards, including from the Ford Foundation and the Fulbright Program, she has attended and presented at numerous international conferences and seminars. This scholar has also published widely, edited multiple books and contributed to Pakistani and international journals on a range of issues relating to new literacies, representation of gender, and media texts and education. She is also a member of the editorial advisory board, Pakistan Journal of Women Studies: Alam-e-Niswan.

If you are interested in becoming involved in the activities of SAR Ireland Section, please contact Dr Anthony Soares, Universities Ireland Secretary at a.soares@qub.ac.uk. Tel: +44 28 3751 1559.

How Your University Can Get Involved